What is breast augmentation?

All intermediate sizes between complete absence of breast volume to breast hypertrophy exist. Breast augmentation consists of increasing the volume of the breast. Breasts size is always evaluated in a subjective way by the person who is endowed with them. It is very usual that the same size breasts of two persons be judged as being too large or too small by one or the other, and this despite their similarities in weight, volume and thoracic girth.

Various preferences for breasts size may also be related to different generations and fashion. Breasts size, featured in and conveyed by fashion and other women’s magazines which could, in a women’s unconscious mind, be regarded as satisfactory and of an entirely normal size in the 1980s are now perceived, in 2015, as very small. Variations may also be linked to geography, civilizations, social communities, etc.

All this to underline that universal volumes are inexistent and that we surgeons must, in as much as is reasonable, adapt ourselves to the client’s wishes. Evidently, the client has her say in regards to the breasts size she wants. It is also legitimate that the surgeon’s role is to give his patient advice concerning the size of her breasts, and in a case of extreme expectations, bring her wishes back to more reasonable dimensions.

Since 1990, the only prostheses authorized in North America and in most European countries were physiological water-based, that is filled with saline water (0.9% salt concentration). The bag is made of “tight molecules” silicone which makes it non-liquefiable, and the saline water cannot seep out and spread into the tissues as silicone gel could sometimes do. The eventual possibility that this bag ruptures and the contents spread into the organic tissues would be an unimportant incident leaving no sequels or undesirable effects in the body.

The cohesive silicone implants, allowed by Health Canada for a few years, are meant to avoid the leaking and fibrous capsules common to old traditional silicon prostheses. Unfortunately, this statement has proven non-infallible. In fact, certain bad effects were noticed with these prostheses many years after their installation such as the double fibrous capsule, the donut deformity of the implants and on a much lower scale, the large cell lymphoma. All these hazards make me opt for saline implants.

Before proceeding with breast augmentation, it is important to consult an experienced plastic surgeon in order to obtain all the necessary information. During your first custom consultation with Dr. Moufarrège, you will discuss the type of breast implant, the size, the location of the incision as well as the implant placement site. Dr. Moufarrège will assess your general health, the firmness of your skin, and the shape and size of your breasts.

The operation consists in preparing small chambers in the breasts for the insertion of the prostheses and thus, creating mammary volume according to the desired size. 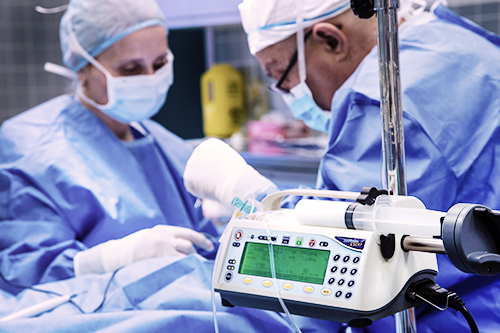 > It is situated in a natural fold.;
> It never causes keloid scars
> It permits few detachment mistakes
> It requires a very short incision of approximately only 2 to 3 cm, especially because that before being inflated, the prostheses can be rolled up and inserted through a hole just big enough to let an auricular go in.
> Should we later have to gain access to the prostheses and their chambers, it is much easier to do so through the sub-mammary route than any other insertion route.

In the silicone period, the most popular chamber was made between the mammary gland and the muscle. Unfortunately, with the physiological serum prostheses, fitting these prostheses behind the mammary gland can bring about the appearance of waves near the surface of the skin. This is why, since the beginning of the 1990s, the most usual chambers are the ones made in the retro pectoral space (behind the pectoralis major muscle). With well-prepared chambers, harmonious, firm, well-placed breasts of natural consistency will be obtained.

Retro muscular breast augmentation, as traditionally practiced, consists of placing the prosthesis behind the Grand Pectoralis muscle. Now this triangular muscle has an oblique free edge from the armpit to the bottom of the sternum. Placing the prosthesis only behind this muscle does not allow the latter to cover all of its anterior aspect. There remains a third of the prosthesis that will not be covered by the pectoralis major muscle, but will be placed directly behind the gland. If this gland is consistent, it will not cause a problem of deformation because the presence of breast tissue covers the resurgence of the prosthesis not protected by the muscle.

Although, if the existing breast is very small, we can notice the relief of the prosthesis not covered by the muscle as an additional bubble. This is called the double bubble. On the other hand, the introduction of the prosthesis under the free edge of the Pectoralis major muscle can, in the majority of cases, injure both the 5th and 6th intercostal nerves and, to a lesser extent, the 4th intercostal nerve, and this fact, interrupt the erogenous sensation of the nipple. We refer you to the drawing which shows the three nerves and their paths to facilitate the understanding of what precedes.

Figure 1 : Anatomical drawing of the chest muscles in the site of breast augmentation. We see the three intercostal nerves which provide the erogenous sensation of the nipple.

Figure 2 : Traditional breast augmentation behind the pectoral muscle; the prosthesis is opened by the muscle only in its two-thirds higher. Forcibly, the nerves responsible for the erogenous sensation are cut off and the feeling condemned.

Figure 3 : Our way of making the increase; the prosthesis is placed entirely behind the four thorax muscles preserving continuity intercostal nerves. Our total retromuscular increase preserves the erogenous sensation of the nipple.

It consists of placing the prosthesis behind all the muscles of the anterior hemithorax, behind the Great Oblique, the Large Serrated, the Small Oblique, and finally the Grand Pectoral. This way, the  sensitivity of the nipples is preserved in our breast augmentation. 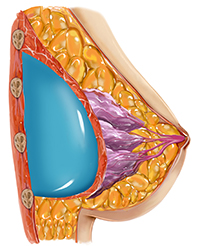 During the first 24 hours following the operation, the pain is due to the muscular detachment. Administration of analgesics and muscle relaxants will attenuate the pain. The patient leaves the clinic on the same day and recovers at home. On the very next day, the patient can move about freely without, however, exerting herself. Convalescence normally lasts between 10 and 14 days.

In our clinic, we are in the habit of practicing this type of operation on Thursdays; this allows the patient to go back to her normal occupations four days later, the next Monday, while taking great care to avoid violent or brutal physical efforts. Hypafix, the dressing put into place in the operating room, is removed one week later. After the patient will be seen at intervals of 1, 3, and 6 months, then one year later, and once a year when possible without any fees to pay.

Because of the involuntary pectoralis major muscle contraction the prostheses, during the first few weeks or even months, will be at a higher level than the one where they were placed. This is only temporary. Along with the slackening of the muscular contraction, the prostheses will go back down to their normal level. If by chance they don’t, they can be brought back by a simple surgical procedure requiring only a few minutes.

A breast augmentation well performed, prostheses well chosen, and a surgical indication well founded (justified), will guarantee a beautiful long-term result. One must be aware that prostheses manufacturing companies only promise a 10-year lifetime guarantee for them. However, if no other related problems exist, their replacement can be done by an extremely simple procedure, and in a very short time (a few minutes). The postoperative consequences are also very simple since all the required dissection has already been done during the 1st operation.

Generally, companies guarantee saline implants for life. This means that one pays only once in her life for the prostheses, even if they have to be changed 3 or 4 times over a 60-year period on account of, for example, deflation. If a prosthesis deflates before the 10-year time limit, the companies replace it without charge and they pay the surgeon’s fees. However, after the 10-year time limit, only the prosthesis will be free.

Breast augmentation before and after 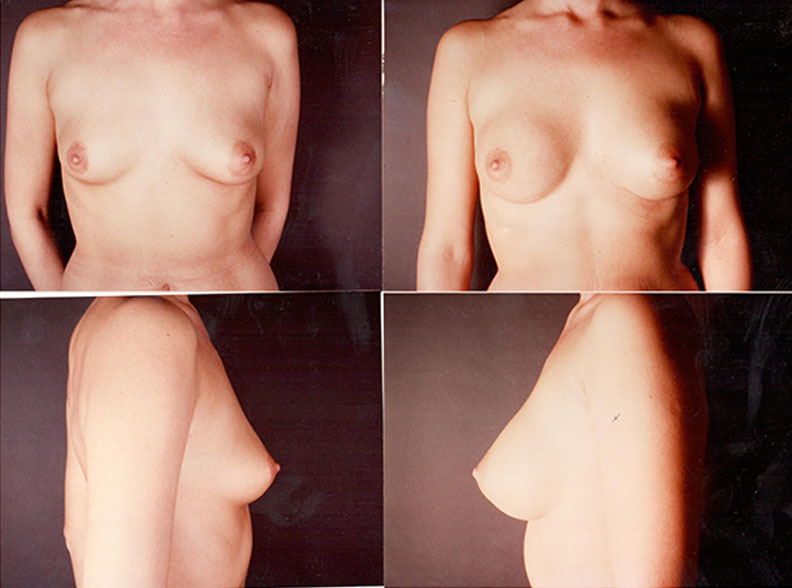 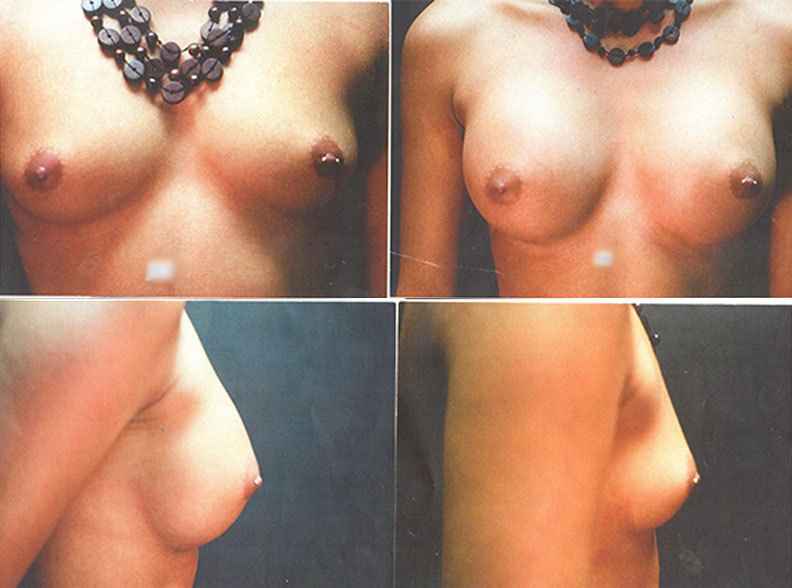 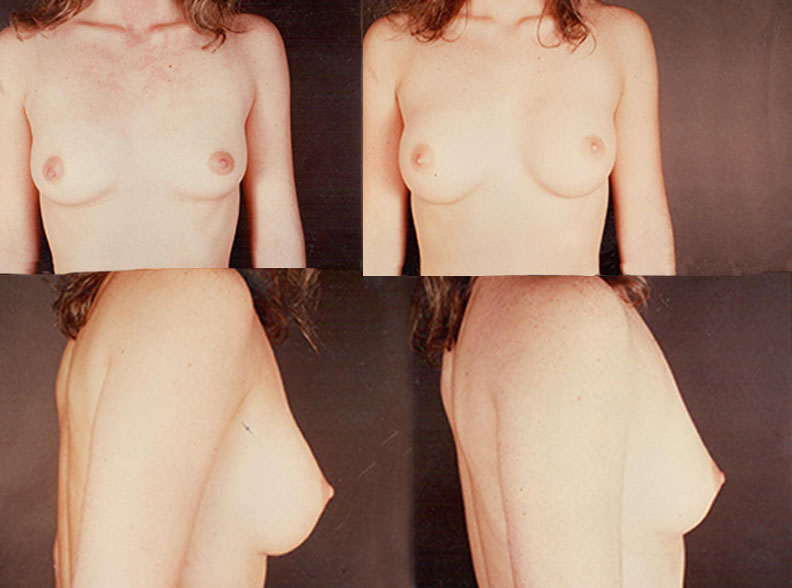 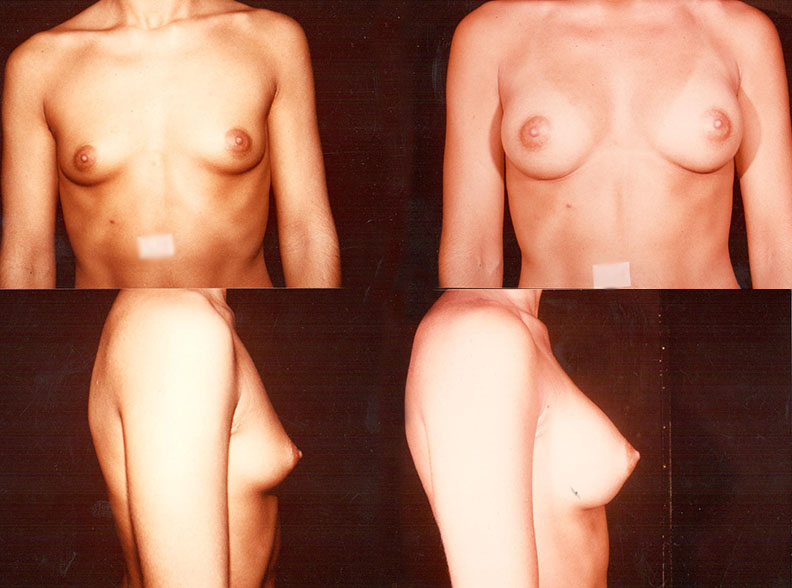 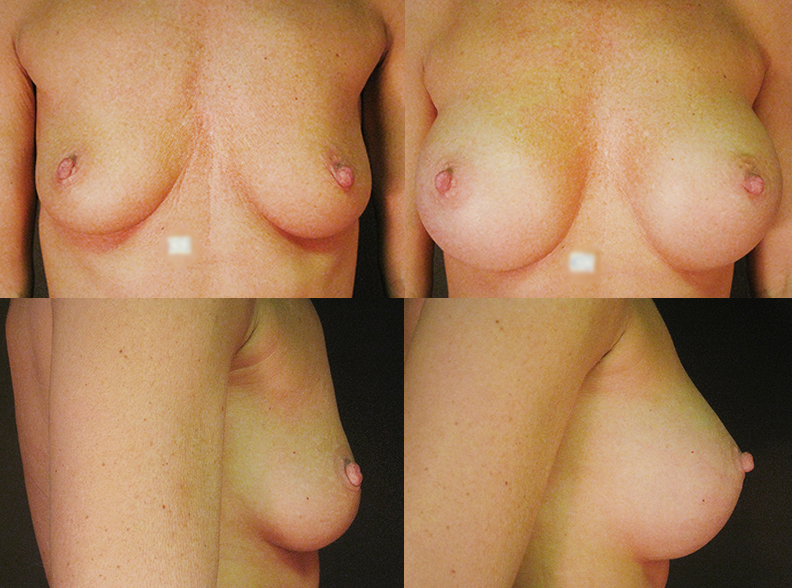 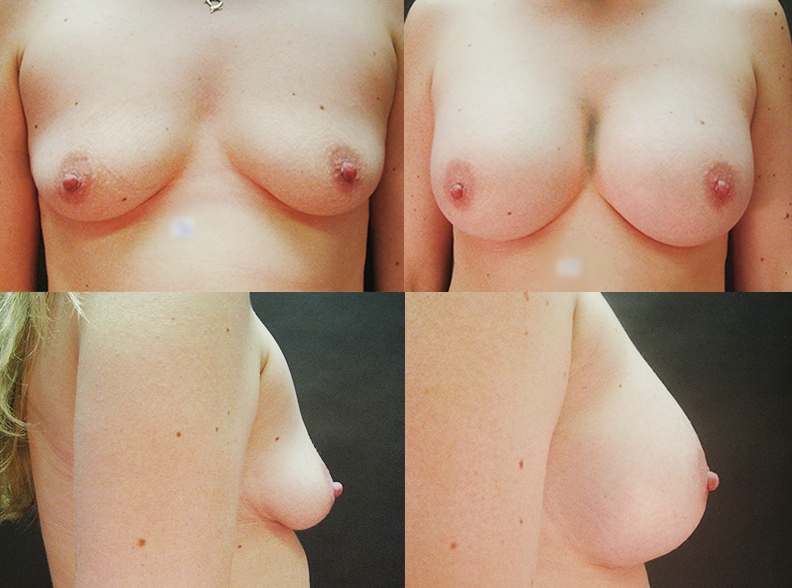 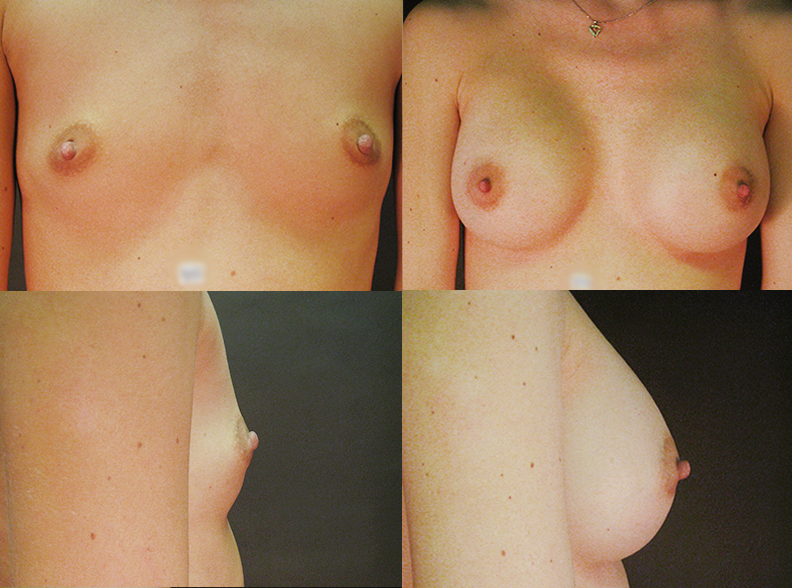 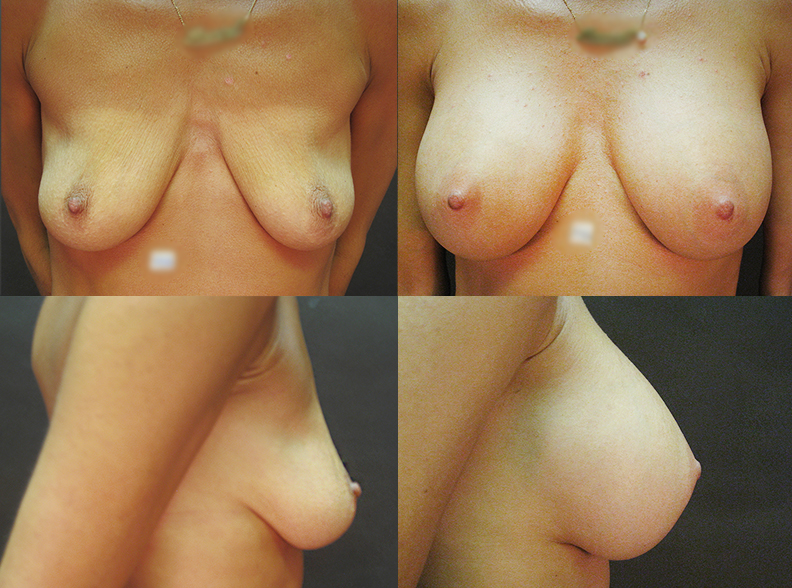 How much is a breast augmentation in Quebec?

Breast augmentation with saline or silicone implants generally costs between $ 9,000 and $ 12,000 in Quebec.

Can you breastfeed after having breast augmentation?

Yes, breastfeeding is possible since the prostheses are located behind the mammary gland regardless of the location of the scar. Placement of axillary and submammary implants poses no risk to breastfeeding because the milk ducts are located far away. As for the placement of the prosthesis via the hemi-areolar approach, it requires better technical precision, but an experienced surgeon is able to perform the operation while preserving the milk ducts and their terminal arborization.

What are the risks and complications associated with breast augmentation?

Dr. Moufarrège will explain the risks to you in detail during your first consultation:

Can you have a mammogram if you have implants

Yes, it is possible to do a mammogram with prostheses, just notify the technician so that he takes pictures of all breast tissue around the implant. Breast augmentation does not affect your risk for breast cancer or its screening.