This aesthetic eyelid surgery is not to be confuses with eyebrow lifting which is simply part of the forehead (see Rhytidectomy). Upper blepharoplasty consists of cutting off the elliptical excess of skin. Opening of the subjacent septa (partitions of soft tissue) allows the removal of the periorbitary fat responsible for eyelid swelling caused by water retention (oedema). Closing is done following a line which must merge with the upper palpebral fold. If the scar does not merge with the fold, the incision has not been done at the proper level and the subsequent scar will show.

Until the late 1980’s, lower blepharoplasty was automatically done with an incision along and one millimeter away from the lower eyelid ciliary rim (edge) and terminating at about one centimeter past the external eye commissure (corner). After this incision was made, an important area of thin skin, approximately 2 to 2.5cm in height was elevated. Following this, an opening was created in the orbitary septa (the same partitions described above for the upper lids) allowing the removal of excess fat causing lower eyelid puffiness and creating very noticeable eyebags on many people and which make them look tired and in ill health. The skin was then stretched to cover the same area it did before its detachment, but since it had been smoothed out by stretching, it now exceeded the ciliary rim, so the excess skin was then removed and closing was done along the initial incision. This surgical procedure can be of great help if it is well done. However, if it is not required or badly performed, it may turn into a surgical catastrophe causing an eversion (i.e. roll of skin or ectropion), or at least a detachment of the lower eyelid. Risks of ectropion can ensue from:

> a weakness of the orbicular muscle, generally found in people of advanced age
> the recision of too much skin. Unfortunately, surgeons with little experience may erroneously evaluate the amount of skin to be removed, and as a result, later find themselves faced with an ectropic eyelid (an eyelid presenting an ectropion).
> The nonexistence of cheek bone contours (flat cheek bones). It is strictly unadvisable to perform lower blepharoplasty in an open manner on people who have no cheek bone contours. 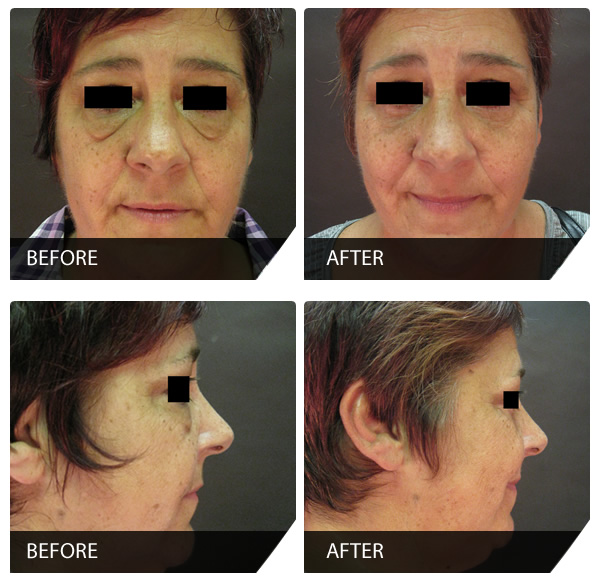