Face lift or rhytidectomy consists in performing different surgical procedures on a face which has become coarse with age, wrinkled by repetitive muscular contractions or worn down by the harmful effects of aggressive extrinsic (sun, pollution) or intrinsic factors (nicotine addiction, arteritis, acne, etc.). Youthful traits are: high eyebrows, a relatively smooth forehead, high cheek bones, relatively curved lips, a high nasal point (tip), light nasogenial furrows, the absence of jowls or of a crop (a “pouch” which gives the person the aspect of having a neck like that of a turkey’s), a smooth neck and a well-defined chin/neck angle. Ageing traits are: sagging eyebrows, a wrinkled forehead, flat cheek bones, wrinkled and straight lips, a prickled nasal point, deep nasagenial furrows, jowls, a crop, a wrinkled neck, ill-defined chin/neck angle. With ageing, we generally see the loss of high facial contours along with the wrinkling of the skin and an increase in volume of the lower part of the face – imagine a reversed facial structure which would look like an upside down pear as shown in the following diagram: From that point on, we realize that rejuvenation cannot be achieved by simply stretching the wrinkled skin but by complex and judiciously chosen procedures which will restore as many characteristically youthful traits as the choice of procedures will have been determined “intelligently”. In other words, apart from the classical detachment and stretching of the skin, other procedures can, on a case by case basis, bring about a subtler change and a more spectacular improvement whether they are added to or substituted for cutaneous traction. In a more practical way, and without denying the benefits obtained from a properly done traction of the skin, this could mean that, under certain conditions, we could better improve the look of a face by restoring its cheek bone contour than we would by detaching and stretching the skin. It is widely agreed in most circles that the face must be divided into three thirds. The three thirds to be considered in a face lift are:

In order to lift the upper third, we formerly made an incision in the scalp or just ahead of it which spread from one ear to the other. Nowadays, this incision can be avoided with endoscopy. Through three 1 cm long each incisions, we can make all the necessary dissections in order to be able to stretch the skin, smooth it out, elevate the eyebrows and eliminate the small eyebrow puckering muscles (the procerus and the corregator); all this while keeping the vasculonervous branches intact. This technique allows us to solve elegantly and with minimal trauma the majority of problems such as crow’s feet, eyebrow sagging, brow and glabella puckering (the glabella being the area at the base of the nose between the two eyebrows).

Through an incision in the scalp starting at the temple 5 cm above the ear, going down and behind the tragus (cartilage) of the ear, then around the lobe, we proceed to detach the skin and the aponeurosis (girdle of fibrous membrane) enwrapping the muscles of the face in order to suspend it from a higher, and therefore, younger position. (This girdle is called S.M.A.S., i.e. Superficial Muscular Aponeurosis System). This lifting does not, therefore, rely on the traction of the skin to bring about rejuvenation but rather on the suspension of the skin content, the result of which presents three advantages:

> The first comes from the action itself of suspending the aponeurosis girdle with all the muscle structure it enwraps, thus recreating a more natural youthful looking oval face.
> The second comes from the support given to the lower eyelid by the S.M.A.S., the restitution of youthful cheek bone contours, the disppearance of jowls, the diminished impression of dark rings or shadows under the eyes and the decreased risk of a lower eyelid slackening and of its eversion in elderly people (ectropic eyelid).
> The third advantage is that of the removal of the forces of traction the skin used to be subjected to and which, consequently, rendered healing difficult, causing the dehiscence or reopening of wounds, unsightly scarring, and even cutaneous necrosis in various areas. All these relatively frequent complications following conventional face lifts are minimized with the detachment of the skin and the suspension of the S.M.A.S.

In conclusion, I am proud to point out that this technique of the median tier lifting was devised and done for the first time at the end of the 1970′s in our own workplace, l’Hôtel-Dieu de Montréal Hospital by a colleague and personal friend of mine, Doctor Jacques Papillon.

We can contemplate lifting the lower third of the face in two ways depending on whether we are dealing with a crop or not.

> In the presence of a crop or of an ill-defined chin/neck angle
> A crop is the result of the collapse of the cutaneous and subcutaneous structures below the chin, encompassing an area delimited by one, sometimes two radii or lines both originating at the fold under the chin and ending on each side of the anterior surface of the neck. In a case such as this one, the surgeon must take a subgenial approach and make a 3 cm long incision in the transverse fold located under the chin. This incision in the skin fold will, in the long run, leave an almost imperceptible scar. Following the subjacent skin detachment and the subsequent dissection of the platysma (a neck muscle), a triangular resection of part of this muscle can be done followed by the plicature of the free edges in a gradual or double breasted fashion in order to elevate the floor of the mouth and to restore the chin/neck angle. However, correction of this portion of the lower third is rarely sufficient, and in the majority of cases, it must be combined with the retro auricular procedure.
> In the absence of a crop, or once this has been corrected through the chin incision, we undertake the retro auricular procedure.
To do this, an incision is made from the ear lobe, then over the auricle’s posterior face and upwards until the middle of the ear height to then extend posteriorly into a gentle curve and disappear horizontally into the scalp, coming to an end 8 cm behind the ear. We now proceed to detach the skin in the area delimited by the incision at the top, the clavicle at the bottom. The detachment of one side meets with that of the opposite side in the sub genial area along the medial line. The platysma detachment is done in the same manner as that of the S.M.A.S., and is followed by the required plicature to first achieve a muscular lifting. This procedure, like the S.M.A.S., restores the chin/neck angle and does not cause a too severe traction of the skin. The chin and neck areas are then tightly covered by the skin, an excess of which, left behind the ear, is cut off. The closing is done along the incision line without any tension.

Surgery of the smile

Did it happen to you that you are told by somebody that you look angry? Did you notice when you look into a mirror that you look upset or sad when actually you are not? There are some caracteristics at the mouth extremities revealing a wrong sad or bad mood. A simple surgery executed under local anesthesy can correct these traits of sadness or bad mood. 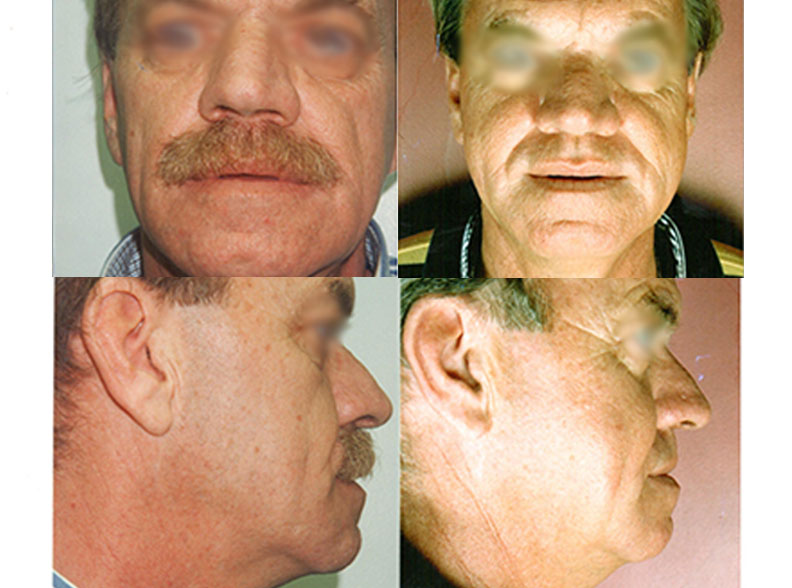 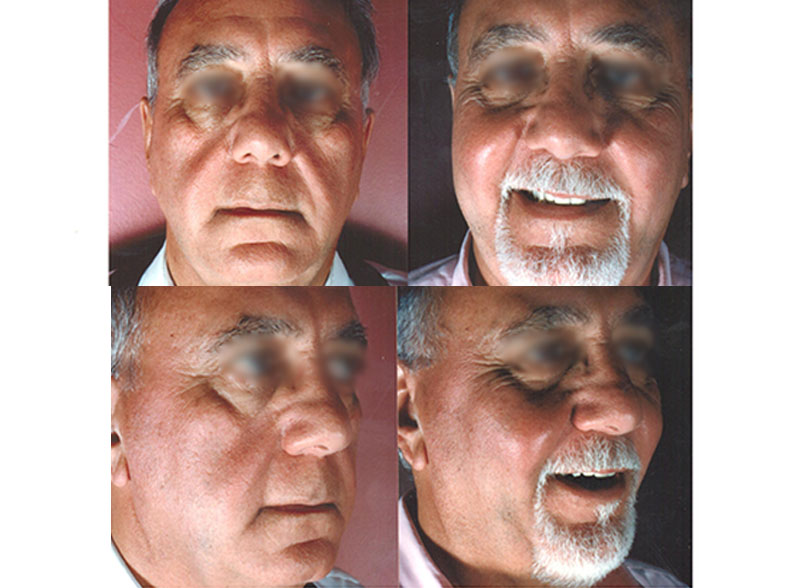 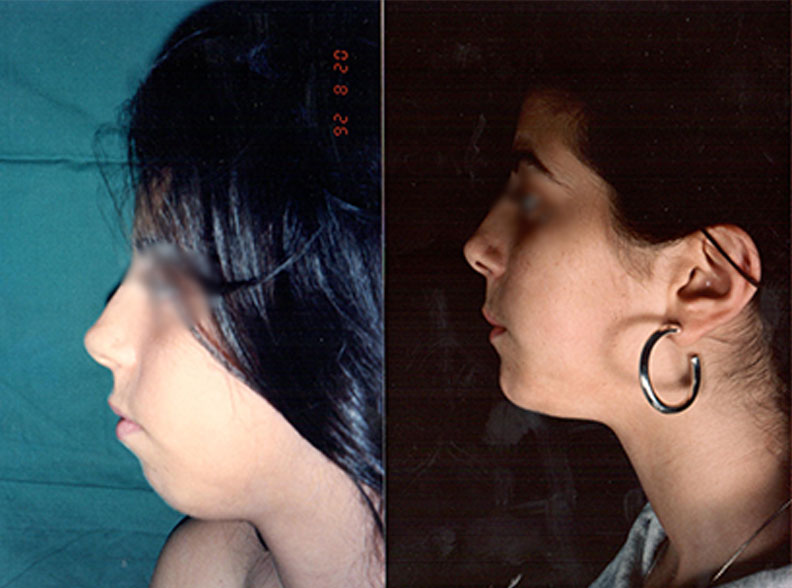 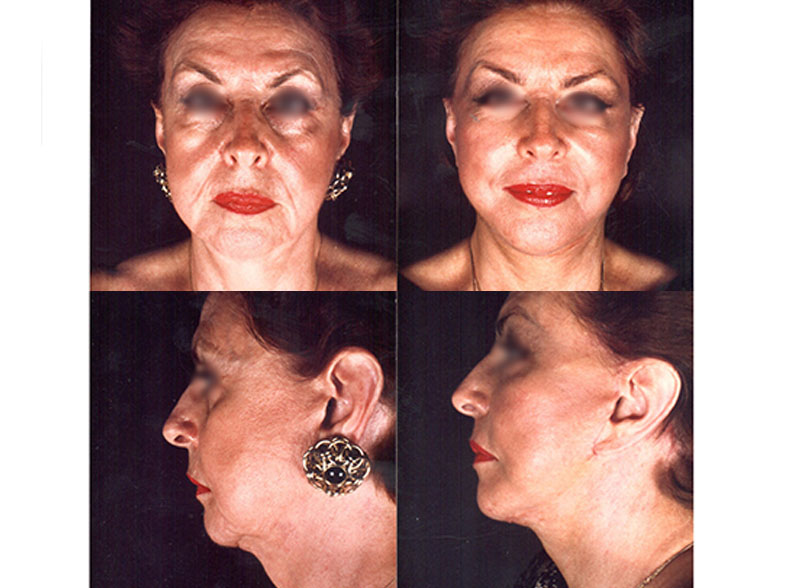